The fancafe for Kim Rokyun of 100% has donated a well to Cambodia in honor of their one year anniversary.

100’s Kim Rokhyun’s main fancafe ‘Zest Rockhyun” celebrated itss one year anniversary recently, through charity With Asia, by making the generous donation of a well to Samarong Village in the Prey Veng province of Cambodia. In Samarong, it is difficult for villagers to access clean waterm, and this often leads to villagers catching waterborne diseases.

Zest Rockhyun commented: “In conjunction with the fancafe’s one year anniversary, by following Rokhyun’s big hearted example of generosity and thoughtfulness we want to give love to people who’ve lost hope, so that we’re all doing our best in creating a heartwarming and friendly world together, one step at a time. We are happy and grateful that we can participate in such a meaningful project to celebrate the fancafe’s 1 year anniversary.”

With Asia commented, “The villagers are happy and thankful for such a wonderful gift from Rokhyun’s fans.” Zest Rockhyun also made a charity for Rokhyun’s 24th birthday, earlier this year. 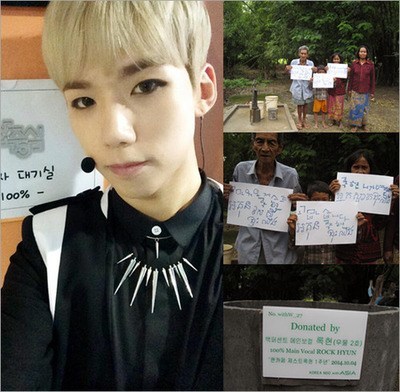